Grand Valley Speedway is a fictional course that appears in all GT games. Its reputation for fast, technical turns makes it one of the most well-known fictional tracks in the world. A shorter version exists called Grand Valley East. Its endurance event Grand Valley 300km has appeared in all GT games since the first, barring the prologue versions.

Grad Valley Speedway is the full course of the Grand Valley complex. It was a 16-turn road course, before Turn 7 was changed into 2 seperate turns, making Grand Valley now a 17-turn road course. Upon the Release of Gran Turismo, it was supposed to be the hardest circuit in the game, but it was Special Stage Route 11 who took that title.

Grand Valley was lined with patches of trees in some areas of the track, and had other decorative properties, like high, speedway-type Grand Stands and lots of signs. This design was trashed after Gran Turismo 3: A-Spec, in favor of a more realistic design. The banking for some turns also decreased slightly.

Turn 1 is the small left-handed kink at the end of the front straightaway. Given proper timing and entry, it can be taken mostly full-throttle by any type of car. Since the R8 has excellent handling, you should probably enter the corner~75 feet from the apex. After this, bring the car out to the grass (being cautious not to hit it).

Swing it back to the left for the following 180r. This is where traffic will start bottlenecking, so be sure to use your rear-view mirror wisely here.

After that comes the intimidating left-right-left. Tag all of the kerbs right as they begin, and swing out of Turn 5 and into 6.

Take the entrance of Turn 6 moderately wide and under hard braking. Coast through the turn and aim toward the grass at a 75 degree angle. Get back on the accelerator as soon as you leave the turn, taking care not to hit the grass. Congratulations, you have officially exited a whole sector of Grand Valley without leaving the track. Let's see if we can keep that momentum up through the following sector.

After Turn 7, get back to the right side of the road and watch for a small section of kerb on the left side heading over the hill. Take Turns 7-8 under partial braking and make sure to stay to the left side for Turn 9.

Lead your car to the right side and brake with 75 feet to go before this turn and keep on the brakes until you reach the apex. After this, nail the gas and bring the car back to the left for the nearly-identical Turn 10.

Tackle this corner the same as 9, but instead of giving full throttle on exit, only give it ~50-75%. This will allow you to set up for everyone's worst enemy, Turn 11 (Tunnel Entry 80r).

Hold your breath and hit the brakes on the entry. Keep the car on the kerb for its entire length. After that, lead the car out for the following Turns 11-12 (Tunnel Turns A-B 180r).

Nice job, you've made it through the second sector. Now keep it up and bring home the World Chapionship for Audi!

Keep the car full throttle thorough here. Don't get up on that kerb, it'll send you flying into the opposite wall if you're not careful. After that corner, swing as far out as you can and set up for Turns 13-14 (Tunnel Turns C-D 180r).

This turn drives identically to Turns 11-12 (Tunnel Turns A-B 180r). Just keep your eyes on the road-don't start gazing off into the shamelessly stunning countryside on the left side of the turn. After exiting this turn, keep to the right side of the track and make a late entry into Turn 15 to set yourself up for the following left-right.

After setting yourself up, dive into Turn 15. Hit the apex and stay on the bottom until the exit. Then, late-apex Turn 16 and tag the grass on the left side of the small exit kink heading onto the straightaway.

This is it-the final turn before the finish! Get over to the left again and head full-throttle through the turn, hitting the apex right at the dead center of the turn, making use of the small concrete patch on the exit. Now bring it up through the gears and rejoice in the fact that you have won at the Grand Valley Speedway!

Since there were no YouTube videos with the R8 on GVS, this will have to do. This car, thankfully, drives very similarly to the R8. 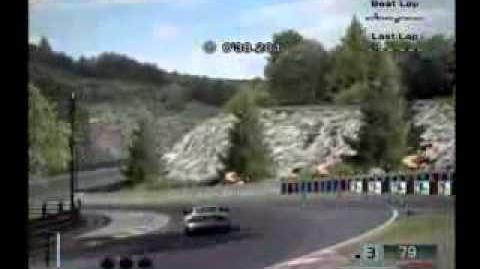 Retrieved from "https://granturismofour.fandom.com/wiki/Grand_Valley_Speedway?oldid=16573"
Community content is available under CC-BY-SA unless otherwise noted.